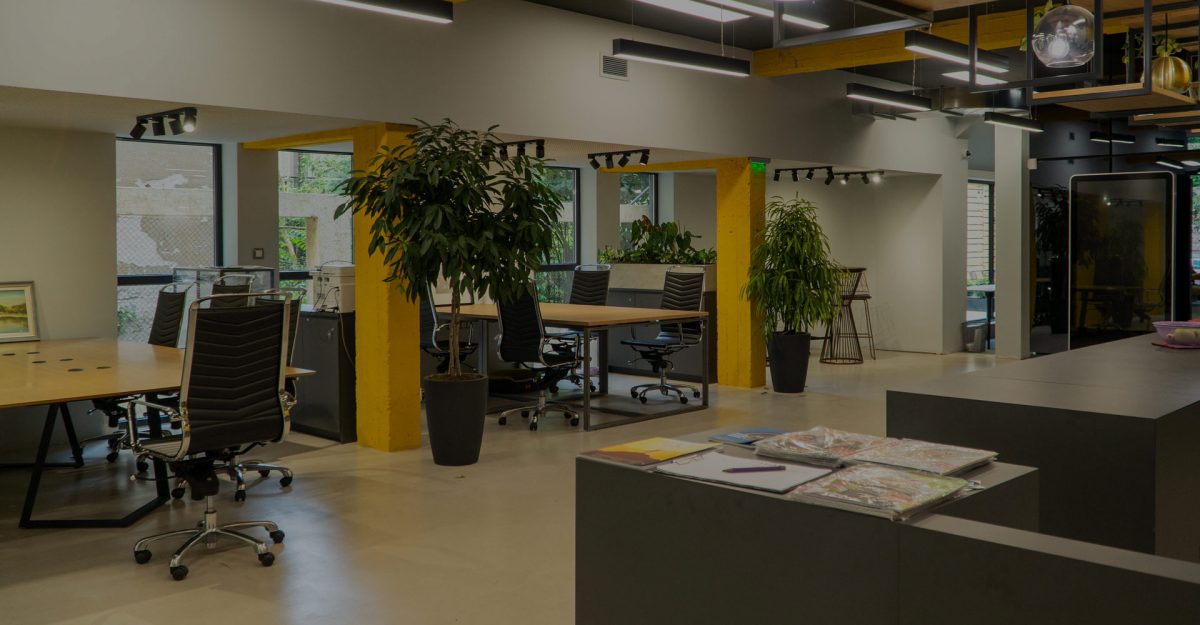 MISSIA23 opened its doors on April 23rd in Sofia – the first of its kind creative hub and a new place for creative people in Sofia. Located on 4 floors, with an area of ​​2,000 square meters, MISSIA23 is a multifunctional space, a common field for creativity and technology to develop the full potential of talents and companies from the creative sector in the capital and to help them expand their ideas and business, both here and in foreign markets.

The hub opens with the offices of 6 companies, a shared workspace with 15 workstations, 3 event halls with a total capacity of up to 200 seats, a concept store for applied materials and handicrafts, an incubator, a talent academy, laboratory space for testing and prototyping, and recording and video studios.

MISSIA23 will be the local contact point and the place-to-be for initiatives with international partners to develop the creative sector in Sofia and to help it acquire know-how, realize ideas and internationalize the business. The focus will be on activities related to design, interior design, visual arts, advertising, animation, music and cinema.

Createch is a relatively new concept for the emerging genre of activities in which technology enables creativity (and vice-versa) to produce new products, services or value-added experiences. Unlike the already established hybrid categories such as FinTech or HealthTech, Createch is just beginning to prove its qualitative and quantitative contribution to the world’s economies. It is not difficult to predict scenarios in which the creative sector can lead to the birth of new products and start-ups in different segments, as well as add value to sectors that have already proven their leading role in modern economies.

The first companies in MISSIA23

Partners in future initiatives that have their offices in MISSIA23 are Tuk-Tam, which support Bulgarians with experience and education abroad and work towards their return to Bulgaria, LaunchLabs, Reach for Change Foundation in Bulgaria, the Bulgarian-British Business Association (BBBA) and last but not least – the Bulgarian team of Idea Academy of one of the most successful Bulgarians – Anthony Hristov, art director of PIXAR for productions such as Wall-E, Finding Nemo and The Incredibles 2, whose goal is to create in Bulgaria an academy for animators and to attract for trainers and lecturers people who worked for Star Wars and other iconic film productions. Anthony Hristov is developing such an academy in Rome, and now it will take place in Sofia as well.

The international partners of the initiative

Key partners and partners in MISSIA23 are The Landing, a shared workspace at MediaCity UK in Manchester; Bulgarian Innovation Hub – the innovation hub created by Bulgarians in Silicon Valley, whose idea is to create a bridge between Bulgarian business and people who want to invest in our country; GITA Center – the Georgian Agency for Innovation and Technology, part of the Ministry of Economy of Georgia; as well as the Vienna Business Agency, which actively supports the development of the creative sector, both through programs to companies from Vienna and through initiatives aimed at markets outside Austria.

Thus, MISSIA23 became the Sofia hub for close cooperation in the creative sector with companies from Tbilisi, Vienna, San Francisco and Manchester (for now, but the network is growing). Entrepreneurs from these countries will be able to come here for joint projects, as well as creative initiatives of Bulgarian companies to be implemented in Georgia, Austria, USA and Great Britain.

The founders of MISSIA23 are Genoveva Christova-Murray and Anelia Kassabova – founders of the fast-growing and progressive company in the furniture industry – Ligna Group, which has been working with dozens of clients in Western Europe for 15 years. Genoveva is the president of the Bulgarian Furniture Cluster and chairman of the Association of Business Clusters in Bulgaria. Both are winners of Entrepreneur of the Year 2010 and an award from the European Commission in Brussels, Genoveva is a lecturer at CREATE & GROW – Creative Sofia meets Creative Vienna, and in December 2017 they appeared on the cover of ForbesWoman magazine.

The mission of MISSIA23 is to establish, in Sofia, an environment that unites progressive, intelligent and talented people from the creative industry in an international and friendly environment so that they can be challenged, motivated, supported, trained and inspired.

Genoveva explains why MISSIA23 opens its doors in Sofia.

Why did you initiate MISSIA23?

Because at the moment in which Ligna Group set out to look for a strategic way forward, we realized that in order to be competitive in the long run, we need to create value, the so-called creative value. We have found that we can attract other people around us like a magnet to create design, content and value. Even when the renovation of the building for MISSIA23 started, people started to appear the likes of which I thought were not present in Sofia, and it turns out they were just waiting for someone to create a common place for them here and gather them together. Like Anthony Christov. They were waiting for someone to make an environment for the ecosystem.

Thus, the personal motivation to develop design brought us together with like-minded people with whom to create a common place for development. We are convinced that the creative industries, supported by technology, are the future, also for the Bulgarian economy. Because in the world today, the “economy of experience” is the next wave that will come after all this current technological boom. This is the future. Sofia and Bulgaria, with their latest achievements in outsourcing and technology, have gathered a lot of talent. But once we learn how to work to deliver products and services, it’s time to learn how to create content. This is the mission of MISSIA23.

MISSIA23 cooperates with external partners from various fields. What attracted them to the project in Sofia?

Sofia has strengthened its image as a leading outsourcing destination in Europe, with more than half of the people in the engineering sector being women. This is a lot of talent that other countries do not have. In the technology sector, we are an environment of leading international companies – Bosch, HP, VMware and many others. Sofia is emerging as an interesting place to invest with its location, talents and increasingly attractive living environment. It is an attractive place for foreign investors and we see this in our contacts with international partners. But after outsourcing, we need to start creating our own content. We already convinced others through examples of people who have returned to Bulgaria and now we want to create our own products and services here.

For what people and teams is the space suitable?

For the progressive ones, with non-standard ideas, who think that elsewhere others will consider them strange, even crazy, because of their bold ideas. Ambitious people who want to be part of the future. It doesn’t even matter what the idea is, people are important. Any idea can die if you do not have the support of the right person.

Were there any obstacles to implementation?

MISSIA23 is the type of project you start building without knowing exactly how, but you know you have to finish it. We faced a shortage of staff from the construction sector, not as a number of possible contractors, but as a quality and attitude towards the implementation of the project. It turned out that despite the construction boom, there are not enough qualified brigades in Sofia. Thank God, although difficult, we found the best. We have not had any other serious obstacles.

What concrete improvements can be made in the business climate in Sofia in order to specifically develop the creative sector?

It is no coincidence that we see the change by creating new places, a new home of like-minded people, with creative ideas that can communicate with each other. Often people do not know how to make their idea a reality. This is our role, creating a startup accelerator in which to gain knowledge and experience on how to get started, including how to approach unavoidable activities such as accounting.

The creative sector in our country is very fragmented and everyone digs within their own garden. The main thing in the MISSIA23 model is to provide a place where people can collaborate with leaders and people with experience to demonstrate the way to success.

How will you compare the investment climate in Bulgaria compared to other markets in which you have experience?

I can safely say that there is already capital here, there are investors who are looking for new projects in which to invest. Before there were only foreign, and now we have Bulgarian companies looking for domestic projects for financing. We reversed the trend and began to create sustainable growth and a competitive environment for local companies to develop the economy. It’s just that startups need a little more courage, not standard folk psychology. If we manage to believe in ourselves, we will be able to create just such an environment – for the brave and the faithful, for the courageous.

What will happen in MISSIA23 in the coming months?

Our first event is emblematic – the 10th anniversary of the Association of Animators in Bulgaria – a community of over 2,900 members. Between 7 and 12 May, MISSIA23 will have masterclasses, screenings of short films, workshops for children and a party with prizes.

At the end of May Reach for Change will start the new season of their campaign CHANGE.

We will host workshops with the participation of Georgian and Bulgarian designers in May and June, the aim of which is to establish contacts and support the implementation of projects for international cooperation.

Our ambition is to organize academies and workshops for children – summer and year-round, to develop creativity even within the littlest ones.

At the end of the year, our CREATIVE SOCIAL CLUB will open its doors on the rooftop of the building – the icing on the cake in the MISSIA23 project.

Translated from the original source of the publication: https://investsofia.com/zashto-sofiya-s-genoveva-hristova-mari-saosnovatel-na-missia23-parvoto-kreateh-prostranstvo-v-sofiya/